Hong Kong Sinfonietta’s “Back On Stage” films land overseas
as more local screenings of “Back On Stage II (Quarantined!)” are added

Hong Kong Sinfonietta’s “Back On Stage” concert film series is landing overseas! Having garnered wide critical acclaim at multiple sold-out screenings in Hong Kong, the orchestra’s “Back On Stage” and “Back On Stage II (Quarantined!)” concert films will receive their first overseas screenings this April at the 2021 Weiwuying TIFA Contemporary Music Platform in Taiwan, organised by the National Kaohsiung Center for the Arts (Weiwuying), on 23 & 24 (Fri & Sat) April at 7:30pm. The films will be shown at the Banyan Plaza Headphone Cinema where each audience member will put on a pair of wireless headphones and snuggle into comfortable deck chairs, while enjoying the film shown on a 400-inch curved projection screen.

Hong Kong Sinfonietta also announces a new round of additional screenings of “Back On Stage II (Quarantined!)” locally due to popular demand. Premiered on 28 Nov last year, the film’s initial round of screenings was disrupted by cinema closures due to the pandemic. Since the reopening of cinemas in March 2021, the film has racked up 15 screenings which have earned it widespread acclaim. The newest round of additional screenings will take place on 29 Apr (Thu) at MOViE MOViE Pacific Place, and 7 & 11 May (Fri & Tue) at PALACE ifc.

The captivating concert film “Back On Stage II (Quarantined!)” – recorded last September at Hong Kong City Hall Concert Hall when the venue was still shut to live audiences due to the pandemic – features Principal Guest Conductor Christoph Poppen and pianist Alexander Krichel, who travelled all the way from Germany and braved through the 14-day quarantine. They present a beautiful programme which begins with Rachmaninov’s ever-exuberant Rhapsody on a Theme of Paganini – a virtuosic masterpiece widely known for its heartfelt Variation 18, which was featured in the Hollywood film Somewhere in Time. Beethoven’s delightful Symphony No 8 follows, as well as a special performance of his sparkling “Spring” Sonata for Piano and Violin, where Maestro Poppen takes the stage as a violinist. Nine state-of-the-art cameras equipped with the latest 4K technology were used, capturing every detail and bringing to you the finest cinematic experience.

Always working tirelessly to reinvent classical music, Hong Kong Sinfonietta began their ground-breaking cinematic ventures last September when they released their début film “Back On Stage” in collaboration with MOViE MOViE, becoming the first local orchestra to appear on the silver screen. Encouraged by the rapturous response to the film, they released “Back On Stage II (Quarantined!)” shortly after, furthering their explorations in fusing the world of classical music and film.

“Back On Stage” concert film series 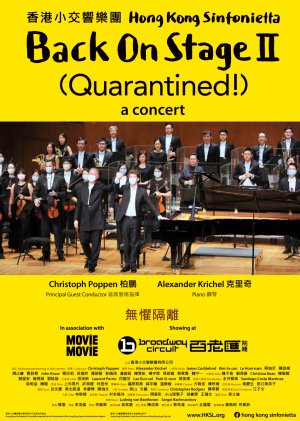 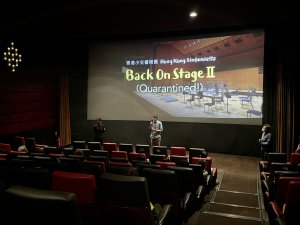