A magnetic creative force with a prolific career spanning more than four decades, Russian violinist Dmitry Sitkovetsky holds an undisputed and venerable position in musical society as a giant personality. As soloist, he has performed with the world’s leading orchestras including the Berlin Philharmonic, Chicago Symphony, Cleveland, LA Philharmonic, Leipzig Gewandhaus, New York Philharmonic and Philadelphia orchestras, amongst others. His extensive discography of more than 40 recordings sees collaborations with such legendary maestros as Colin Davis, Mariss Jansons, Neville Marriner and Yehudi Menuhin.

Sitkovetsky will appear with Hong Kong Sinfonietta for the first time ever on 21 Aug (Sat) to present his authoritative interpretation of Tchaikovsky’s timeless and virtuosic Violin Concerto under the baton of Daniel Raiskin, in a programme which also features the composer’s well-loved Symphony No 5. Also from Russia, Raiskin – currently Principal Conductor of the Slovak Philharmonic Orchestra, Music Director of the Winnipeg Symphony Orchestra and Principal Guest Conductor of the Belgrade Philharmonic Orchestra – will also be conducting the Asian première of Pēteris Vasks’ 2015 work, Musica Serena.

A renaissance man and a magnetic creative force with a prolific career spanning more than four decades, Dmitry Sitkovetsky is celebrated globally as a violinist, conductor, creator, transcriber, and facilitator – and holds an undisputed and venerable position in musical society as a giant personality and educator.

Sitkovetsky’s celebrated career as a violinist is documented in an extensive discography of more than 40 recordings, reflecting the impressive breadth of his repertoire. His recording collaborators to date include such orchestras as the London Symphony, Philharmonia and Royal Concertgebouw orchestras, working with such legendary maestros as Colin Davis, Mariss Jansons, Neville Marriner and Yehudi Menuhin. In 2019, he celebrated the release of a new recital disc on the Melodia label, recorded with Tchaikovsky Competition-winner Lukas Geniušas – with a programme designed as an homage to the legendary duo of Kreisler & Rachmaninov. As soloist, he has performed with the world’s leading orchestras, including the Berlin Philharmonic, Chicago Symphony, Cleveland, LA Philharmonic, Leipzig Gewandhaus, New York Philharmonic, NHK Symphony, and Philadelphia orchestras, amongst others.

Sitkovetsky also enjoys a flourishing career as a conductor, having worked with the Academy of St Martin in the Fields, Orchestre de Chambre de Paris, Dallas Symphony, London Philharmonic, San Francisco Symphony, Shanghai Symphony, and Tokyo Metropolitan orchestras, amongst others. In 1990, he founded the New European Strings Chamber Orchestra, bringing together the most distinguished string players from the top European ensembles, from both Russian and Western musical backgrounds. Since 2003, Sitkovetsky has served as the Music Director of the Greensboro Symphony Orchestra in North Carolina, to whom he has brought such soloists as Emanuel Ax, Yefim Bronfman, Garrick Ohlsson, and Pinchas Zukerman.

Given his unmatched ability to turn any project into a highly anticipated artistic event, Sitkovetsky has also been invited to create, develop and lead a number of festivals, including the Korsholm Music Festival in Finland, Seattle International Music Festival, Silk Route of Music in Azerbaijan and Festival del Sole in Tuscany. He was Artist in Residence of Vadim Repin’s Trans-Siberian Festival, with other festival visits of note include the Enescu, Ljubljana, and Verbier festivals.

Sitkovetsky is also in high demand as a jury member and educator. Recent jury roles have included the Indianapolis International Violin Competition, Concours Musical International de Montréal, XVI International Tchaikovsky Competition, and the Enescu Violin Competition, and the 2019/2020 season opened with the first of a series of teaching residencies at the Royal Birmingham Conservatoire. Additional highlights include Sitkovetsky’s début TEDx talk (The Power of Curiosity), the launch of his first book (Dmitry Sitkovetsky: Dialogues), and his interview series on Medici.tv (It Ain’t Necessarily So). Sitkovetsky’s name has also become synonymous with the art of transcription. His iconic orchestral and string trio versions of Bach’s Goldberg Variations have taken on a life of their own, enjoying regular performances and acclaimed recordings by many of the leading performers of today. He has also arranged over 50 works of major repertoire by Bartók, Beethoven, Brahms, Haydn, Schnittke and Shostakovich. In 2015, he unveiled his transcription of Stravinsky’s Le Baiser de la Fée, premiered by Augustin Hadelich at Carnegie Hall. The 2017/2018 season saw the successful premières the multi-genre work Devil, Solider & Violin (inspired by Stravinsky’s A Soldier’s Tale), and 2018 saw the world première of his transcription of Sarasate’s Navarra Fantasy, commissioned by the Verbier Festival. This performance – marking the Festival’s 25th anniversary – was broadcast live worldwide with an all-star line-up of musicians, including Lisa Batiashvili, Leonidas Kavakos, Mischa Maisky, Vadim Repin, Maxim Vengerov, Tabea Zimmermann, and Pinchas Zukerman – as well as, of course, Dmitry Sitkovetsky himself.

Son of a prominent musicologist, Daniel Raiskin grew up in St Petersburg. He attended the celebrated conservatory in his native city and continued his studies in Amsterdam and Freiburg. First focusing on the viola, he was inspired to take up the baton by an encounter with the distinguished teacher Lev Savich. In addition, he also took classes with maestri such as Mariss Jansons, Neeme Järvi, Milan Horvat, Woldemar Nelson and Jorma Panula.

Currently Principal Conductor of the Slovak Philharmonic Orchestra, Music Director of the Winnipeg Symphony Orchestra and Principal Guest Conductor of the Belgrade Philharmonic Orchestra, Raiskin cultivates a broad repertoire and often looks beyond the mainstream in his strikingly conceived programmes. The 2020/2021 season included appearances with Iceland Symphony Orchestra, Janáčkova Filharmonie Ostrava, Sinfonia Varsovia and Württembergische Philharmonie Reutlingen. Further ahead, he will give his début with the Warsaw Philharmonic and will return to Hong Kong Sinfonietta and Stuttgarter Philharmoniker. With the Winnipeg Symphony, he will undertake a Japan and a European tour with appearances at the Concertgebouw in Amsterdam, De Doelen in Rotterdam and De Singel in Antwerp among others. 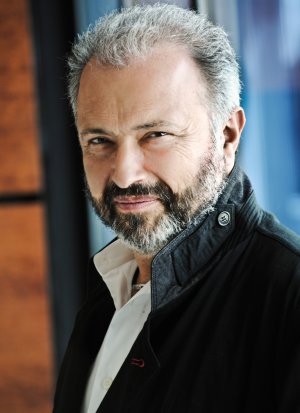 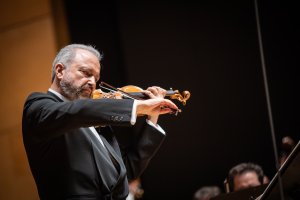 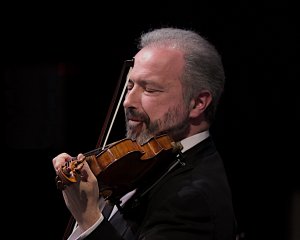 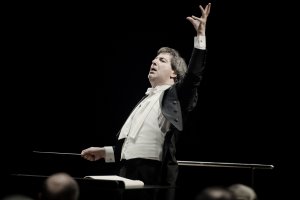 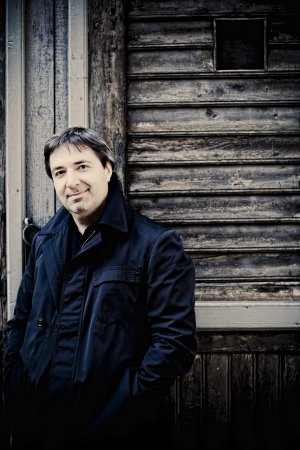 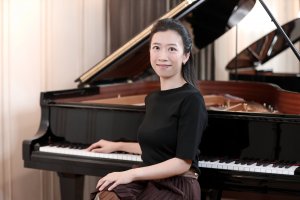