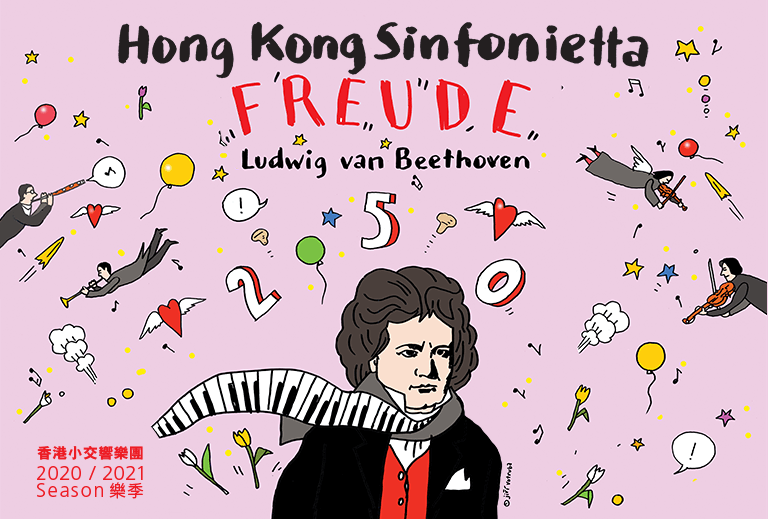 Hong Kong Sinfonietta unveils its new 2020/2021 season. With a prevalent theme of celebrating the music and timeless vision of Beethoven in the 250th anniversary of his birth, Principal Guest Conductor Christoph Poppen’s Inspired by Beethoven concert series continues to present some of the composer’s most monumental and well-loved works. Carrying on its mission to support and nurture local talent, the orchestra introduces Hong Kong composer Charles Kwong as its Artist Associate of the season. A groundbreaking collaboration with Mr Wing Theatre Company from Taiwan sees the spectacular original symphonic musical Pica Pica Choose brought to the stage, while everyone’s favourite piggy McDull returns for a warm and joyous carnival of classical music in celebration of the Chinese New Year.

The year 2020 marks the 250th anniversary of the birth of Ludwig van Beethoven, one of the gargantuan figures in classical music. Despite the unfortunate circumstances of the coronavirus pandemic that saw several concerts cancelled, this season still offers ample opportunities for audiences to revel in the music of the composer. Beethoven’s prowess in symphonic writing is showcased in concerts featuring his iconic 5th and 8th symphonies (7 Nov, 26 Sep), and none other than his incandescent 9th Symphony “Choral”, joined by 4 internationally renowned soloists (30 Jan 2021). French maestro Michel Dalberto brings his interpretations of Beethoven’s 1st and 3rd piano concertos (15 Nov), while violin virtuoso Stefan Jackiw professionally debuts in Hong Kong with the composer’s luminous Violin Concerto (11 July). Local gem Colleen Lee joins conductor and host Jason Lai in Beethoven the Immortal (31 Oct), performing the 5th Piano Concerto “Emperor” in an educational all-Beethoven programme.

A joint venture between Hong Kong Sinfonietta, local actors Jordan Cheng, Anna Lo, Raoul Chan, Rick Lau and Ronald Tsang, and Taiwanese actors from Mr Wing Theatre Company, Pica Pica Choose combines live orchestral music, singing, movement and drama into one unprecedented artistic feast. This passionate and deeply relevant production invites all to contemplate the true meanings of ambition, perseverance and fate, and echoes with the dreamer in all of us.

Conductor, soloist, chamber musician and pedagogue: Christoph Poppen has made a name for himself in diverse roles in the international musical world, winning many awards along the way. During the current season, Christoph Poppen continues his close and highly successful collaboration with the Cologne Chamber Orchestra in his role as Principal Conductor, and as Principal Guest Conductor of Hong Kong Sinfonietta. He is also Artistic Director of the Marvão International Music Festival, which he founded in 2014. Under his leadership, the Festival has grown to become a highly successful and award-winning musical event featuring soloists such as Jörg Widmann, Augustin Hadelich, Javier Perianes and Clara-Jumi Kang.

From the start of his conducting career, Poppen has established an international reputation for his innovative programming and commitment to contemporary music.  From 1995 to 2006, he was Artistic Director of Munich Chamber Orchestra, establishing the ensemble’s new profile in a short period of time. His distinctive programmes, often contrasting classical and contemporary styles with numerous commissioned works, were highly successful.  In 2006, Poppen was appointed Music Director of Radio Symphony Orchestra Saarbrücken and from 2007 until 2011, he was Music Director of the newly formed Deutsche Radio Philharmonie.

As Hong Kong Sinfonietta’s Principal Guest Conductor since 2015/2016, Poppen has presented to the Hong Kong audience a rich repertoire ranging from Austro-German masterpieces to contemporary works, and has brought the orchestra on tour to Germany and to his festival in Portugal. He also co-chaired the 1st Hong Kong International Conducting Competition. As Music Director Yip Wing-sie steps down in May 2020 and before the next Music Director is appointed, Poppen will be responsible for the artistic development of the orchestra.

Kwong’s compositional explorations stretch beyond the paradigms of concert hall music, resulting in numerous site-specific works, sound installations and cross-disciplinary collaborations that highlight the experiential dimension of music. He was the curator of Our Audible City (2018-2019) – a project in collaboration with Hong Kong New Music Ensemble, soundpocket and visual artist Frank Tang, supported by the “Arts: Transforming Hong Kong” Grant of The Robert H.N. Ho Family Foundation – for which he wrote Atlas, a series of site-specific works tailored for non-concert-hall spaces in Hong Kong.

Kwong has been appointed Artist Associate of Hong Kong Sinfonietta for its 2020/2021 season, in addition to his work on contemporary music research and programming for the orchestra since 2015. His recent highlights in 2020 include being selected for the City of Zurich Artist-in-Residence Programme in association with Zurich University of the Arts, a portrait concert in Taipei performed by the Hong Kong New Music Ensemble, and being featured again at the Takefu International Music Festival.

Kwong studied Music at The Chinese University of Hong Kong and King’s College London. In 2013, he earned his doctorate in Composition from The University of York under the supervision of Thomas Simaku, in the capacity of an R C Lee Scholar with full sponsorship from the Drs Richard Charles and Esther Yewpick Lee Charitable Foundation. Over the years, his artistic development has benefitted significantly through tutelages and masterclasses by Toshio Hosokawa, Francesco Filidei, Mauro Lanza and Oscar Bianchi, among others.

For programme details, please refer to the new season brochure or visit www.hksl.org/concert

Tickets are typically available two months prior to the concerts. There are concessionary tickets for full-time students, senior citizens, people with disabilities and CSSA recipients for most of the concerts. Please refer to individual concert leaflets for details.