Set sail on an invigorating musical voyage to the vast and breathtaking land of Scotland with Hong Kong Sinfonietta and Music Director Emeritus Yip Wing-sie on June 11 (Sat) at Hong Kong City Hall, where the long-awaited Asian première of leading British composer Thomas Adès’ Shanty – Over the Sea will set the scene for Bruch’s beloved and charismatic “Scottish Fantasy” celebrating the country’s rich folk tradition, performed by distinguished Korean violinist Jehye Lee. Mendelssohn’s captivating depiction of the wild and dreamy landscapes of Scotland in his Symphony No 3 “Scottish” will conclude the evening of exquisitely evocative music.

Korean violinist Jehye Lee has enjoyed a highly successful career since winning the 1st Prize, Audience Prize and Chamber Music Prize at the Leopold Mozart Violin Competition in 2009, the 3rd Prize and Chamber Music Prize at the Tchaikovsky Competition in 2011, as well as numerous prizes at high-profile competitions such as the Menuhin, Pablo Sarasate and Tibor Varga competitions. In 2013, she became the youngest concertmistress in the history of the Augsburg Philharmonic, and having been the Principal 2nd Violin of the prestigious Bavarian Radio Symphony Orchestra since 2014, her mesmerising musicality and enviable technique will be on full show in this début with Hong Kong Sinfonietta.

Another highlight of the concert is the Asian première of leading British composer Thomas Adès’ Shanty – Over the Sea. Conceived during COVID-19 lockdowns in 2020, the beguiling work paints a widening seascape through 15 individual voices in a communal ritual, designed to create a protective mantra around sailors who are embarking on great peril. The work was commissioned by the Australian Chamber Orchestra, New Jersey Symphony Orchestra, Münchener Kammerorchester, Hong Kong Sinfonietta, Amsterdam Sinfonietta, Swedish Chamber Orchestra, Kammerorchester Basel with Gstaad Menuhin Festival & Academy, Istanbul Music Festival, and Barbican Centre with Britten Sinfonia.

Winner of the First Prize, Audience Prize and Chamber Music Prize at the Leopold Mozart Violin Competition in 2009, the Third Prize and Chamber Music Prize at the Tchaikovsky Competition in 2011, as well as prizes from the Yehudi Menuhin, Pablo Sarasate and Tibor Varga violin competitions, Jehye Lee has performed in the world’s great concert halls such as the Golden Hall of the Vienna Musikverein, Dvořák Hall in Prague’s Rudolfinum, Seoul Arts Center, Victoria Hall in Geneva and so on, and has been invited to many chamber music festivals including those in Lockenhaus, Ravinia and Kronberg.

Lee began playing the violin at the age of seven. After studying with Nam-yun Kim at the Korea National University of Arts in her native Seoul where she took her bachelor’s degree, she earned a master’s degree in performance with Miriam Fried at the New England Conservatory in Boston. She then moved in 2010 to Germany, where she perfected her playing under Ana Chumachenco. While studying at the Hochschule für Musik und Theater in Munich, she founded the Trio Gaon, advised by Christoph Poppen and Julius Berger. In 2013, she became the youngest concertmistress in the history of the Augsburg Philharmonic, and since 2014 she has headed the Second Violins in the Bavarian Radio Symphony Orchestra.

Born in London in 1971, Thomas Adès studied piano at the Guildhall School of Music & Drama, and read music at King’s College, Cambridge. A prodigious composer, conductor and pianist, Adès was described by The New York Times in 2007 as one of today’s “most accomplished overall musicians”.

Adès’s chamber opera Powder Her Face (1995) has been performed worldwide, whilst The Tempest (2004) was commissioned by London’s Royal Opera House, and has since been taken up by international houses including New York’s Metropolitan Opera, where it was recorded for a Deutsche Grammophon DVD which subsequently won a Grammy Award. His third opera, after Luis Buñuel’s The Exterminating Angel, premiered at the Salzburg Festival in July 2016 before travelling to London, New York and Copenhagen.

Between 1993 and 1995, Adès was Composer in Association with the Hallé Orchestra, producing These Premises Are Alarmed for the opening of the Bridgewater Hall in 1996. Asyla (1997) was written for Simon Rattle and the City of Birmingham Symphony Orchestra. In 2005, Adès premiered his Violin Concerto, Concentric Paths, for Anthony Marwood and the Chamber Orchestra of Europe, at the Berlin Festspiele and the BBC Proms. Tevot (2007) was commissioned by the Berlin Philharmonic and Carnegie Hall, whilst In Seven Days, a concerto for piano with moving image, was premiered in 2008 in London and Los Angeles. Polaris (2011) was premiered by the New World Symphony with Michael Tilson Thomas in Miami, and was later choreographed to great acclaim by Crystal Pite as part of an all-Adès evening at Sadler’s Wells. Other choreographers who have worked with his music include Karole Armitage, Kim Brandstrup, Wayne McGregor and Ashley Page. Totentanz for mezzosoprano, baritone and large orchestra was premiered at the 2013 Proms by the BBC Symphony Orchestra. Luxury Suite from Powder Her Face (2017) was commissioned by Simon Rattle and the Berlin Philharmonic. Adès’ chamber music includes two string quartets, Arcadiana (1994) and The Four Quarters (2010), a Piano Quintet (2000) and Lieux Retrouvés (2009) for cello and piano.

Adès has won numerous awards, including the 2020 Gramophone Contemporary Award, 2015 Léonie Sonning Music Prize, Leoš Janáček Award, and the prestigious Grawemeyer Award in 2000, of which he is the youngest-ever recipient. He was awarded a CBE in the 2018 Queen’s Birthday Honours, and was Artistic Director of the Aldeburgh Festival from 1999 to 2008. He was invited to judge the Toru Takemitsu Composition Award in 2020, and received three further Grammy nominations in 2021. He coaches piano and chamber music annually at the International Musicians Seminar, Prussia Cove. 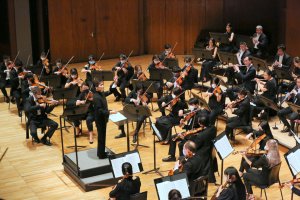