Two German artists leading the great wave of young talents in the music scene today – cellist Maximilian Hornung and pianist Alexander Krichel – are visiting Hong Kong this November to treat the local audience to two concerts as well as a duo recital! On 18 Nov (Fri) and 20 Nov (Sun), Hornung and Krichel will play under the baton of Music Director Emeritus Yip Wing-sie Shostakovich’s Cello Concerto No 1 and Beethoven’s Piano Concerto No 5, “Emperor” respectively. Additionally on 15 Nov (Tue), the two stars will meet in a captivating duo recital to play for the audience spectacular works by Beethoven, Brahms, Rachmaninov and more. Tickets are now on sale at URBTIX and POPTICKET.

Cellist Maximilian Hornung debuts with Hong Kong Sinfonietta
Having risen to international prominence after being appointed Principal Cello of the prestigious Bavarian Radio Symphony Orchestra at the age of 23, cellist Maximilian Hornung has since impressed as a soloist and performed with leading orchestras and conductors of the world such as London Philharmonic Orchestra, Tonhalle Orchestra Zürich, Vienna Symphony, Mariss Jansons, Daniel Harding, Yannick Nézét-Séguin, Bernard Haitink etc. On 18 Nov, he will take centre stage at Hong Kong City Hall Concert Hall, playing Shostakovich’s breath-taking Cello Concerto No 1 with Hong Kong Sinfonietta under the baton of Music Director Emeritus Yip Wing-sie. The programme also includes Stravinsky’s sparkling Suite No 2 for Small Orchestra and Tchaikovsky well-loved Symphony No 4.

Pianist Alexander Krichel returns to Hong Kong
ECHO Klassik prize winner Alexander Krichel is known for his captivating interpretations of the most demanding works, and combining analytical clarity with fiery emotion. Two years since starring in Hong Kong Sinfonietta’s concert film Back On Stage II (Quarantined!) – recorded during the public closure of concert halls in 2020 – he will be performing live for the Hong Kong audience Beethoven’s monumental Piano Concerto No 5, “Emperor” on 20 Nov with Hong Kong Sinfonietta, under the baton of Music Director Emeritus Yip Wing-sie. Krichel will also be attending cinema screenings of the aforementioned concert film to meet and greet the audience on 13 and 16 Nov, as one of the featured films at MOViE MOViE Life is Art 2022 film festival. (Movie tickets at Broadway Circuit)

A meeting of the two stars
On top of their concerts with Hong Kong Sinfonietta, Hornung and Krichel will also come together in a duo recital on 15 Nov at Hong Kong City Hall Concert Hall, to present some of the most magnificent and timeless works of chamber music by Beethoven and Brahms, while also individually showcasing their mesmerising interpretations of solo works by Rachmaninov and Dieter Ammann, promising an unparalleled spectacle of exquisite music-making!

Enjoy a 20% discount when you purchase full-price tickets to two or more of the above concerts!

Born in Guangzhou and brought up in Hong Kong, Yip graduated from the Royal College of Music in London and the Indiana University at Bloomington, USA, where she obtained her Master’s Degree in violin performance and conducting. As the winner of the Koussevitsky Scholarship and the Seiji Ozawa Fellowship Award, Yip also attended the conducting seminar and fellowship programmes at the Tanglewood Music Center. Her mentors included great maestros such as Norman Del Mar, Leonard Bernstein, Seiji Ozawa, Gustav Meier and David Atherton.

Accolades Yip has received internationally include “Chevalier de l’Ordre National du Mérite” bestowed by the French Government (2015), “Chevalier dans l’Ordre des Arts et des Lettres” by the Ministry of Culture and Communication of France, Fellow of the Royal College of Music (FRCM), and she was also named the Ong Teng Cheong Distinguished Visiting Professor at the Yong Siew Toh Conservatory of Music, National University of Singapore. In Hong Kong, she received an Honorary Fellowship from the Hong Kong Academy for Performing Arts (2022), the “Hong Kong Women of Excellence in the Six Arts Award” from the Hong Kong Federation of Women and the Bronze Bauhinia Star (BBS) from the Hong Kong Government (2013), and was University Artist at The University of Hong Kong (2011-2012).

Highlights of the 2021/2022 season included débuts with the Bavarian State Orchestra, Rundfunk-Sinfonieorchester Berlin, Utah Symphony, Kristiansand Symphony Orchestra and Netherlands Philharmonic Orchestra, as well as the Cello Biënnale Amsterdam, tours with the Bundesjugendorchester, an extensive trio tour with Anne-Sophie Mutter and Lambert Orkis in Europe, and a return to the Tonhalle-Orchester Zürich and Florida Orchestra. He played recitals together with Herbert Schuch and Hisako Kawamura, and performed trios with Sarah Christian and Timothy Ridout. In May 2023, he will premiere a new cello concerto by American composer Katherine Balch with the Staatsorchester Darmstadt under Karsten Januschke.

Hornung’s impressive and versatile discography includes solo concerts as well as recordings with prominent chamber musicians. He received the ECHO Klassik Prize for his first album (Sony 2011) – for which he was designated as Young Artist of the Year – as well as for his recording of Dvořák’s Cello Concerto with the Bamberg Symphony under the direction of Sebastian Tewinkel on the same label the following year. Further recordings under Sony have included Richard Strauss’ major cello works with the Bavarian Radio Symphony Orchestra under Bernard Haitink (2014) and Haydn’s cello concertos with the Kammerakademie Potsdam under Antonello Manacorda (2015). In 2017, Deutsche Grammophon released a highly acclaimed recording of Schubert’s “Trout” Quintet which Hornung recorded with Anne-Sophie Mutter and Daniil Trifonov, amongst others. Further recordings were released on GENUIN, Linn Records, NEOS, Bridge Records and CPO. In October 2018, myrios classics released his recording of Shostakovich’s Cello Concerto No 2 and Sulkhan Tsintsadze’s Cello Concerto No 2 with the Deutsches Symphonie-Orchester Berlin under Andris Poga.

Born 1986 in Augsburg, Hornung began taking cello lessons at the age of eight. The teachers with whom he has studied most intensely are Eldar Issakadze, Thomas Grossenbacher and David Geringas. As cellist of the Tecchler Trio in which he played until 2011, he won the First Prize of the ARD Music Competition in 2007. At the age of only 23, he became First Principal Cellist of the Bavarian Radio Symphony Orchestra and held this position until 2013. He has been supported and sponsored by the Anne-Sophie Mutter Circle of Friends Foundation and Borletti-Buitoni Trust London. Since the spring of 2022, he has been Artistic Director of the Traunsteiner Sommerkonzerte.

Pianist and ECHO Klassik prize winner Alexander Krichel is known for his captivating interpretations of the most demanding works of piano literature from Beethoven and Liszt to Rachmaninov and Prokofiev. Born in Hamburg in 1989, the keyboard virtuoso combines analytical clarity with fiery emotion, in keeping with the motto of the Neuhaus Piano School: “Cold fingers, cool head and hot heart”.

Highlights of Krichel’s discography – which comprises seven albums – include the live recording of Rachmaninov’s Piano Concerto No 2 with the Dresden Philharmonic Orchestra under Michael Sanderling, and the recording of Ravel’s three major piano cycles. After five CD productions with Sony Classical, he celebrated his début with Berlin Classics in 2021 with his album of works by Enescu and Mussorgsky.

During the COVID-19 pandemic, Krichel connected with his audience by initiating the world’s first classical music concert at a drive-in cinema in May 2020, which was broadcast by WDR. His audience also followed his video diary from a Hong Kong hotel suite where he had to observe a 14-day quarantine before a filmed concert with Hong Kong Sinfonietta. For Beethoven’s 250th birthday, he and the Meiningen Hofkapelle brought Beethoven’s Piano Concerto No 5 to the stage of the Staatstheater and viewers from all over the world via livestreaming, and in the Essen Philharmonie he also played a solo recital of Beethoven, Schumann and Liszt for an online audience.

Krichel enjoyed training with two of the greatest Russian pianists of the present day – in Hanover, he was the last student of Vladimir Krainev, before graduating with the highest distinction from the Royal College of Music in London where he studied with Dmitri Alexeev. Away from the piano, he is passionate about mathematics, natural sciences and foreign languages. He is involved in projects that give children and young people access to classical music, as well as hospice charity work. 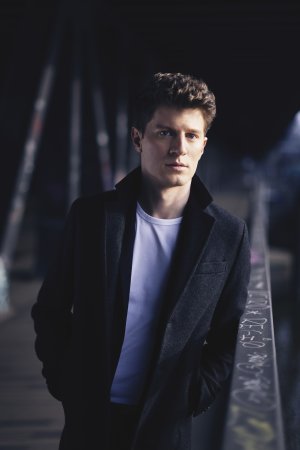 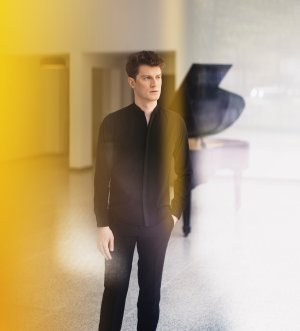 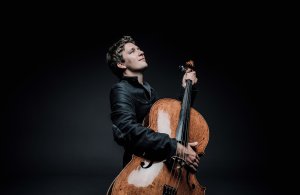 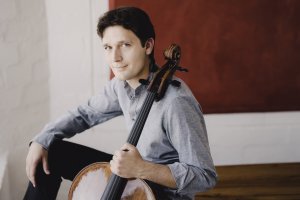 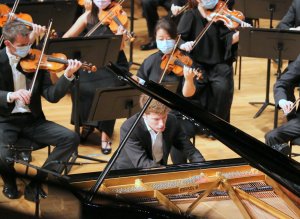 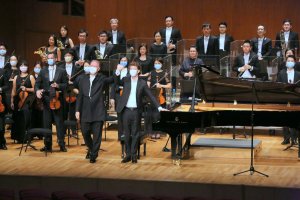 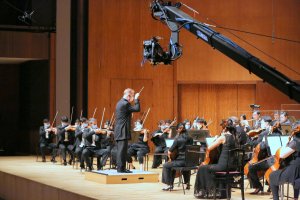