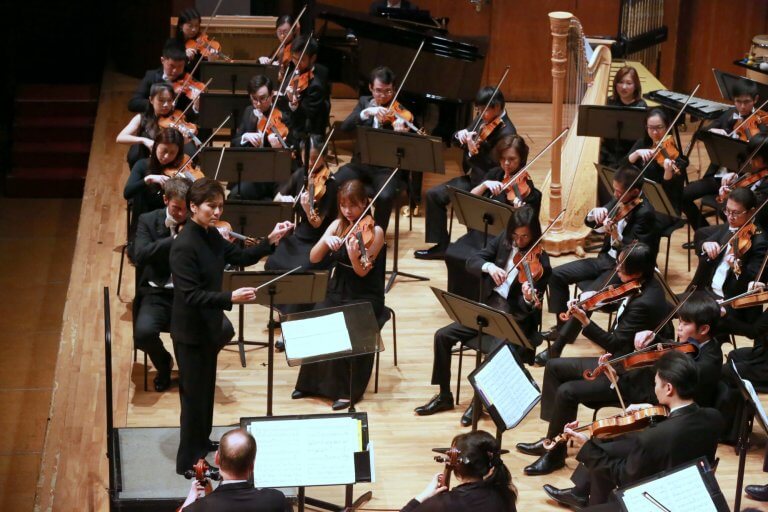 The season 2019/2020 will be Yip Wing-sie’s final season as Music Director of Hong Kong Sinfonietta. She will stay on as Conductor Emeritus of the orchestra after that.

In her 16 years of leadership, the orchestra has developed into an orchestra worthy of flagship status in Hong Kong. It has also started to make its mark internationally – as an orchestra with high artistry and passion for new music.

During her time as Music Director of Hong Kong Sinfonietta, she received the following accolades:

Yip Wing-sie – in her own words:

“One of my dreams as a young conductor was to be able to have my own orchestra in Hong Kong. When the chance came in 2001 (as the Board of the Hong Kong Sinfonietta approached me), I was overwhelmed with the opportunity and accepted the offer. I learnt everything on the job – as the experience was quite different from being the Music Director at the Guangzhou Symphony Orchestra, which I was at the time. At home in Hong Kong where I grew up, it felt especially difficult at the beginning because I knew a lot of people and I was not used to being in a position of responsibility off the podium. I learnt that making decisions which were beneficial to the orchestra did not necessarily please everyone.

“Looking back now, I realised that I was not only blessed with the chance to lead an orchestra but that I was actually working with a group of dedicated musicians and the solid and committed administration team, plus a supportive Board ! Not every conductor can have it all… and I think I did. This may sound cliché but it was really more than a dream come true.

“2020 will be the 18th year I have been with the orchestra. I think I have built an orchestra which will stay strong and spirited, and most importantly, able to continue the good work it has been doing – to inspire the city of Hong Kong, my home. I am proud and confident that the ensemble I am handing over to the new leader of the orchestra is of an extremely high standard and with good attitude.

“One of my mentors Leonard Bernstein taught me, amongst many other things, how important it was to inspire and pass the torch on. I hope that in my work with the Hong Kong Sinfonietta, I have inspired people, especially the younger generation, who are the future of the city.”

“Yip Wing-sie is the one representative of classical music that everyone knows in Hong Kong. A true Hong Kong gift – someone who made such a difference to the musical landscape in Hong Kong! I admire and appreciate everything Wing-sie has done to make Hong Kong Sinfonietta what it is today – and although it would be hard to imagine Hong Kong Sinfonietta without Wing-sie as Music Director, I am relieved that she has agreed to remain as our Conductor Emeritus and that she will return to conduct us. Afterall, we are all from Hong Kong – and having worked together for so long, I believe that our cords cannot really be severed that easily!

“Hong Kong Sinfonietta has been very lucky to have Yip Wing-sie as Music Director in its formative years – and with the solid foundation I have confidence that it will grow from strength to strength.”