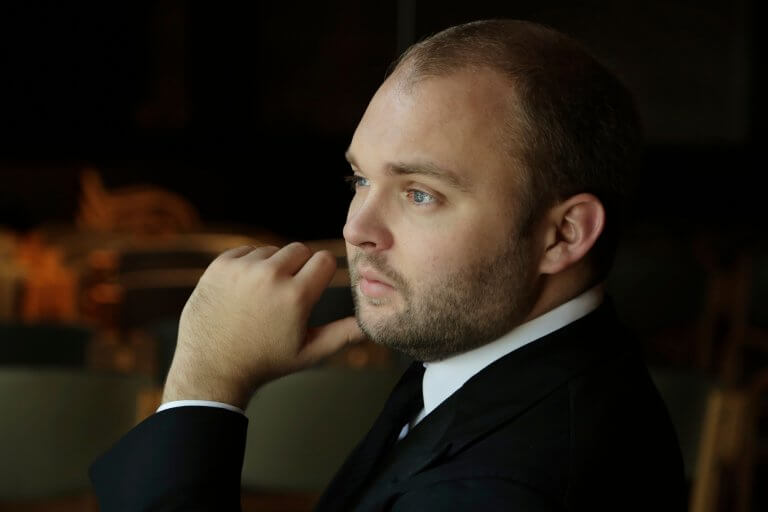 Matthew Swensen, one of today’s most versatile and promising young singers, has already cultivated a vast symphonic, operatic and oratorio repertoire. Since his 2017 debut with the Bavarian State Radio Orchestra at age 24, he has made debuts all over Europe, including at Oper Frankfurt as Tamino in Die Zauberflöte, at the Staatsoper Hannover, the Hamburg Symphoniker, Residenz Kammer Orchester München and Theater Basel. This coming season includes debuts at the Hamburg Elbphilharmonie, Konzerthaus Hannover, Wigmore Hall, Cadogan Hall and the Royal Concertgebouw in Amsterdam. He was recently named the JEAN MIEKLE PRIZE WINNER FOR BEST DUO of the Wigmore Hall Song Competition with pianist Katelan Terrell. Notable role debuts in Frankfurt include Don Ottavio (Don Giovanni) and Alberto (La Gazetta.) He makes his debut with Classical Opera UK as Ferrando in Mozart’s Cosi fan tutte.

The 2018/19 season began with Matthew Swensen’s debut as Tamino in Die Zauberflöte at Oper Frankfurt as the youngest member of their ensemble. Further performances in Frankfurt included Camille in Lehar’s Die Lustige Witwe, a new double-bill production of Tchaikovsky’s Iolanta and Stravinsky’s Oedipus Rex, and as Flavio in Bellini’s Norma with Elza van den Heever in the title role. On the concert stage, he was the tenor soloist in Handel’s Messiah with the Residenz Kammer-Orchester München and the Augsburger Domsingknaben. He made his European recital debut at Oper Frankfurt in February 2019 with songs of Beethoven and Britten, followed by his debut with Orchester La Cetera as the tenor soloist in Bach’s Johannes Passion in Basel, led by musical director Andrea Marcon. He also made another debut with the Hamburg Symphoniker Orchester, again as the tenor soloist in Bach’s St. John Passion.

The 2017/18 season marked Matthew Swensen’s European debut with the Bayerische Rundfunk Orchester in the role of Christgeist  in Mozart’s Die Schuldigkeit des ersten Gebots, receiving critical acclaim; “the tenors, above all Matthew Swensen, performed their duties with absolute nobility,” wrote the Münchner Merker. He made his debut at Oper Basel in Switzerland as Aufidio for a new production of Mozart’s Lucio Silla directed by Hans Neufelds and lead by conductor Eric Nielsen that same fall. He was the Evangelist and tenor soloist during Bach’s Christmas Oratorio with the Residenz Kammer Orchester München and the Augsburger Domsingknaben. He appeared as a guest soloist with the Basel Symphoniker in a concert of Mozart selections, where he was praised for having “a bright, joyful coloratura voice as well as excellent technique” by the Badische Zeitung.  A graduate of the prestigious Juilliard School, in the 2016/17 season he was the tenor soloist in Mozart’s Requiem at Lincoln Center, the tenor soloist in Bach’s Magnificat at Carnegie Hall, and sang the role of Bill in Juilliard Opera’s Flight which was praised by Opera News, writing that Matthew “Sang with the sweet tones of a Disney Prince.” He made his debut at Juilliard Opera as Le Fils in Poulenc’s Mamelles de Tiresias; Opera News praised Matthew’s debut saying that he “sounded uncannily french, every syllable of the text delightful to hear.”

Numerous concerts and recitals included a performance of Britten’s Canticle I and II with Roger Vingoles, and countertenor Jakub Jozef Orlínski in Paul Recital Hall at Lincoln Center, following two lied recitals in Alice Tully Hall during their Wednesday’s at One series.Other appearances in the United States include the Wolftrap Opera, where he was a member of the opera studio, Opera Theater of St. Louis as a Gerdine Young Artist, with the National Symphony Orchestra, St. Louis Symphony and the Rochester Philharmonic Orchestra. Masterclass participation and performances include Graham Johnson, Stephanie Blythe and Yannick Nezet-Seguin. Matthew first made his Carnegie Hall debut in The Song Continues Festival in January 2016. Already an accomplished singer of oratorio, credits include Bach’s St. Matthew Passion, St. John Passion, Magnificat and Christmas Oratorio, Bruckner’s Mass in F, Mendelssohn’s Elijah, Haydn’s Creation and a performance Handel’s Messiah in Boston at age 19. Matthew Swensen is a student of Robert Swensen and Kathryn Cowdrick.