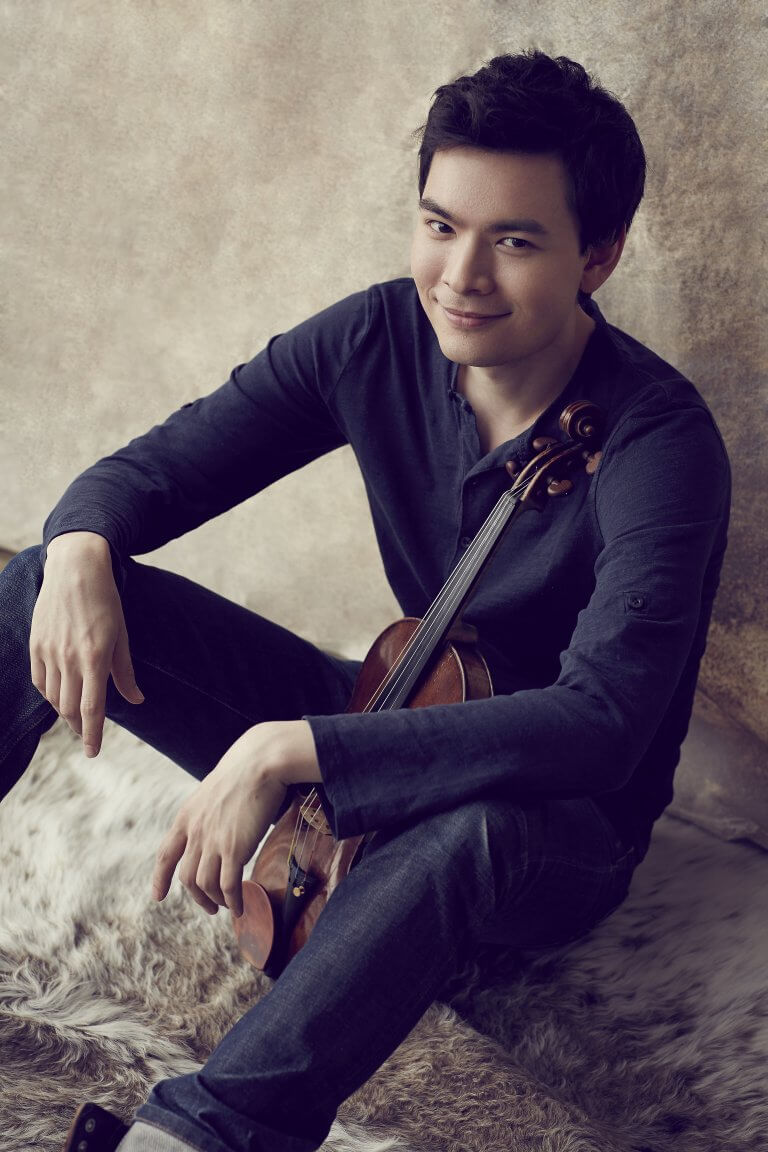 Since bursting into the London concert scene with the Philharmonia aged 14, Jackiw has been a frequent visitor to Europe, having collaborated with the Deutsches Sinfonieorchester Berlin, Rotterdam Philharmonic, Netherlands Radio Philharmonic, Danish National Symphony, Orchestre Philharmonique du Luxembourg, Orchestre National d’Ile de France, Helsinki Philharmonic, RTVE Symphony Orchestra, RAI National Symphony Orchestra, London Philharmonic Orchestra and Bournemouth Symphony Orchestra. In March 2014, he gave the world première of American composer David Fulmer’s Violin Concerto No 2 “Jubilant Arcs”, written for him and commissioned by the Heidelberg Festival with the Deutsche Kammerphilharmonie under Matthias Pintscher. Recent North American performances have included concerts with the Philadelphia, Pittsburgh and Chicago symphony orchestras and at Aspen and Blossom music festivals. The New York Times praised his Carnegie Hall performance of Prokofiev Violin Concerto No 2 with the Russian National Orchestra and Kirill Karabits for his “remarkable purity of tone”. Further afield, he has toured with the Australian Chamber Orchestra and performed with the Tokyo Symphony Orchestra.

In recital, Stefan Jackiw has performed at the Schleswig-Holstein Music Festival with pianist Christoph Eschenbach, and at the Louvre in Paris. In America, he has given recitals at the Ravinia Festival, Boston Celebrity Series, Kennedy Center, Mostly Mozart Festival, Metropolitan Museum of Art and the opening night of Carnegie’s Zankel Hall. As a chamber musician, he has collaborated with Yo-Yo Ma, Gil Shaham, Steven Isserlis and Jeremy Denk.

Highlights of the 2019/2020 season in Europe include bringing the Stravinsky Violin Concerto to the Bournemouth Symphony, Slovenian Symphony and Helsinki Philharmonic orchestras, as well as returning to the RTÉ National Symphony Orchestra in Dublin to perform Beethoven under the baton of Leonard Slatkin. In America, he performed with the San Diego, Indianapolis and Baltimore symphony orchestras, and in recital with harpsichordist Mahan Esfahani, as well as with his JCT Piano Trio alongside pianist Conrad Tao and cellist Jay Campbell.

On disc, Jackiw received critical acclaim for his début recording of Brahms’ violin sonatas with pianist Max Levinson, released on Sony: “Jackiw is fantastic…This is now the recording of Brahms’s violin sonatas to have” (Fanfare). He has recorded the Beethoven Triple Concerto with the Academy of St Martin in the Fields with Alan Gilbert, Alisa Weilerstein and Inon Barnatan for Decca Gold, and the Ives violin sonatas with Jeremy Denk for Nonesuch, to be released in the future.

Born of Korean and German heritage, Jackiw began studying the violin at the age of 4. His teachers included Zinaida Gilels, Michèle Auclair and Donald Weilerstein. In 2002, he was awarded the prestigious Avery Fisher Career Grant.