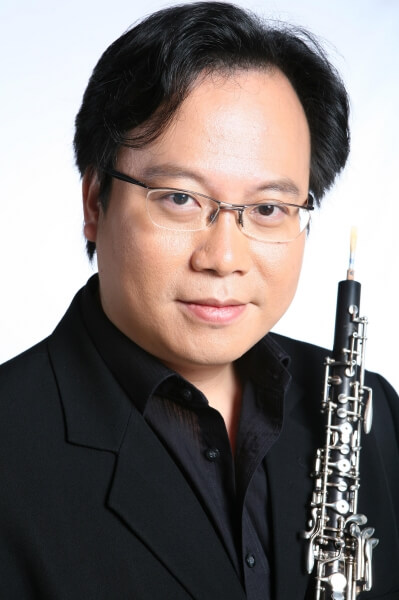 Currently Head of Woodwind, Brass and Percussion at the Hong Kong Academy for Performing Arts (HKAPA), Oboist Yiu Song-lam is also the Artistic Director of Hong Kong Wind Kamerata, Artist in Residence at the Education University of Hong Kong and a founding member on the Board of the Asian Double Reed Association. As a soloist he has performed with Hong Kong Sinfonietta, Goldberg Ensemble from England, Macao Orchestra, Euro-Asian Philharmonic Orchestra, Thailand Philharmonic Orchestra and Guangzhou Symphony Orchestra, among others.

A member of the baroque ensemble Conjunto Hemiola, Yiu is an active chamber musician in Europe, having performed at the Donostia-San Sebastián Musical Fortnight “Quincena Musical” in Spain. He has also appeared at other major festivals in Japan, Korea, Canada, England, Holland, France, Germany, Italy and Salzburg in Austria. From 2007 to 2011 he was invited by the International Double Reed Society to perform in New York, Utah and Arizona in the United States, as well as Birmingham in England. Apart from his collaborations with the Academy of St Martin in the Fields under the baton of Sir Neville Marriner and with London Virtuosi, Yiu has premiered new works by composers in concerts such as those by the International Society for Contemporary Music (ISCM).

Devoted to music education and the advancement of young talents, Yiu serves as adjunct faculty member of the Chinese University of Hong Kong, the University of Hong Kong and the Hong Kong Baptist University. He was adjudicator at the Fernand Gillet-Hugo Fox Oboe Competition 2015 in Tokyo, Japan, and at the Muri Competition 2013 in Switzerland. He was awarded the Associate of the Royal Academy of Music for his contribution to the music profession.

Born in Hong Kong, Yiu graduated from HKAPA in 1989 and was subsequently awarded the Hong Kong Jockey Club Scholarship to study at the Queensland Conservatorium Griffith University, the Royal Academy of Music in London and the Rotterdam Conservatorium in Holland. In 1994 he obtained the Diplom der Künstlerischen Abschlußprüfung with distinction at the Hochschule für Musik und Tanz Köln in Germany. He has attended classes of Celia Nicklin, Emanuel Abbühl, Thomas Indermühle, Lothar Koch and Maurice Bourgue.

Yiu plays on a Rigoutat oboe.